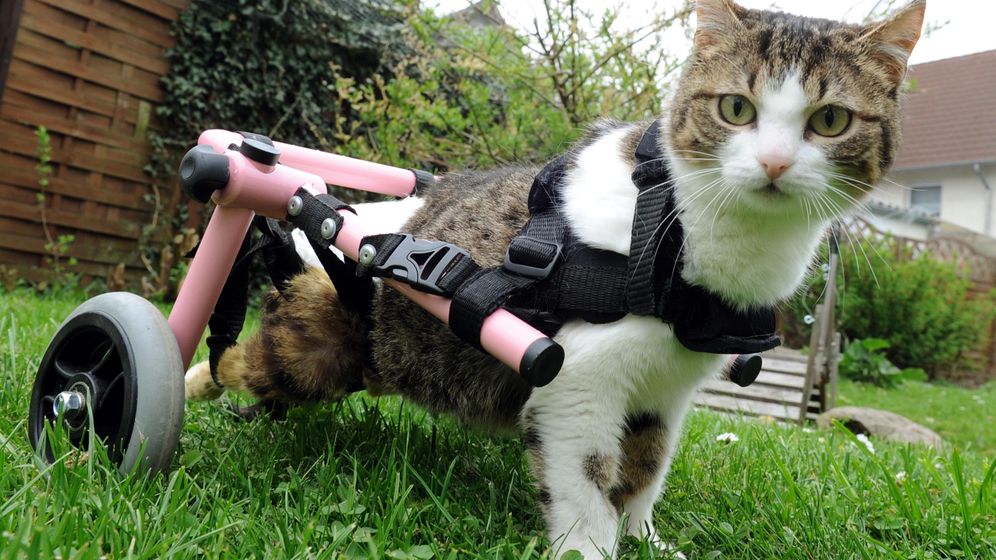 Photo Gallery: The Fall and Rise of Brigitta the Cat

Fate was cruel to Brigitta, the brave, tabby-and-white cat with big friendly green eyes. She was trotting along in her native Bulgaria when someone playing a brutal, callous game fired an air gun at her. The pellet lodged in her spine and paralyzed her hind legs.

All her nine lives seemed to be over. A vet wanted to put her out of her misery. But then German animal lover Angie Heuer heard about the case via Facebook. Heuer, who runs a charity for stray cats, brought Brigitta to Germany for medical attention.

Her local vet wanted to put Brigitta down as well. But Heuer refused. "There was no need for that," she told public broadcaster NDR.

Heuer constructed a pink wheelchair for Brigitta, enabling her to move about with relative ease by pulling herself along on her front legs. Thanks to her guardian angel, Brigitta has gotten a second lease on life in her new home town of Celle near Hanover.

"She's enjoying life, she's happy and confident," said Heuer. "She's great." Even without the wheelchair, Brigitta manages to get about by dragging herself along on her backside.

"She does what she wants," said Heuer. "When she wants to get down the stairs, she just hobbles down. And when she hears her food is ready, she's even faster."

Heuer paid €1,000 ($1,300) for an operation to remove the projectile from Brigitta's spine. But she will never regain the use of her hind legs.

Brigitta hasn't just found a new lease on life but a new role as well -- as an adoptive mother to two abandoned kittens just two weeks old. "I offered the babies to three other cats but they didn't want them," said Heuer.

But Brigitta accepted the kittens as her own. She can't feed them, but she nuzzles and licks them affectionately. "She's got a task now. That's what she needed," said Heuer, looking with fondness and pride at the cat she has saved.

5 Bilder Photo Gallery: The Fall and Rise of Brigitta the Cat