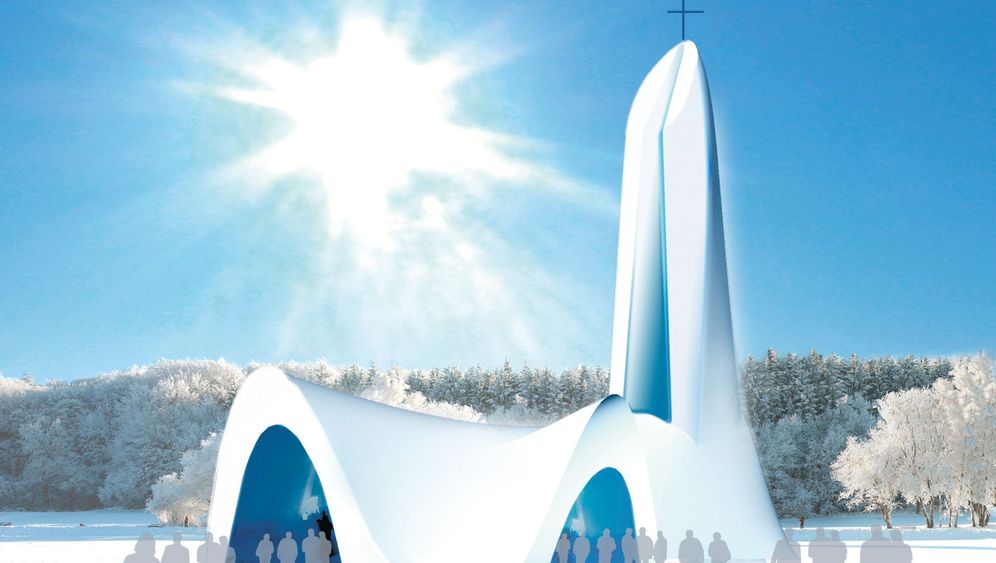 Everything is in place in Mitterfirmiansreut for the mountain village's biggest construction project in a century -- everything, that is, but the snow. Because residents in the Bavarian village near the Czech border are planning to erect a full-size church made entirely out of snow, in homage to their ancestors who did the same thing 100 years ago.

Once completed, the church will be able to accommodate up to 190 people. The plans call for a sweeping design, with a main room 26 meters long and 6.5 meters high and a tower soaring 17 meters high. Inside there will be sculptures, an altar and pews -- all made out of ice. In total, 1,400 cubic meters of snow will be needed.

Although the snow church doesn't even exist yet, requests for weddings and baptisms have already been flooding in to Bernd Stiefvater. The 45-year-old restaurateur has worked with friends on plans for the church for two years. Some 200 people have since become involved in a booster club.

Stiefvater wants the snow church to serve as a reminder of an extraordinary event in local history. At the beginning of the 20th century, a trip to Sunday mass for people living in the remote mountain village of Mitterfirmiansreut meant an arduous 90-minute walk to the neighboring town of Mauth. After their pleas for a church of their own fell on deaf ears, the villagers decided to mount an unusual protest during the Christmas season of 1911: They built their own church out of snow.

"For me this is a really touching story of how people of faith can achieve anything," says Stiefvater. He wants the new version of the snow church to honor this commitment 100 years later. The planning and construction of the church will cost about €100,000 ($135,000), according to the booster club. The money for the church is coming from sponsors, and the organizers are hoping to win financial support from an EU program.

The plans for the snow church have been drawn up by architect Alfons Doeringer. "Nothing in this project is routine. There were no standards and no norms," he says. Designs for the church's vaulting shape were created in collaboration with structural engineers. Doeringer is very aware of the potential risks: "That is an extremely heavy mass of snow, and people will be underneath it."

The architect says 20 centimeters of snow is needed before construction can begin, with the grand opening planned for Dec. 17. There will be concerts and prayers held in the church, as well as an ice sculpture exhibition from Jan. 22 to 28 and a market with traditional handicrafts on Feb. 12.

Interest in the project has been brisk, and Stiefvater says numerous tour groups have registered to visit the church. And if there is not enough snow in Mitterfirmiansreut this year?

"That is very unlikely," says Stiefvater. "But then we would just build the church next winter."