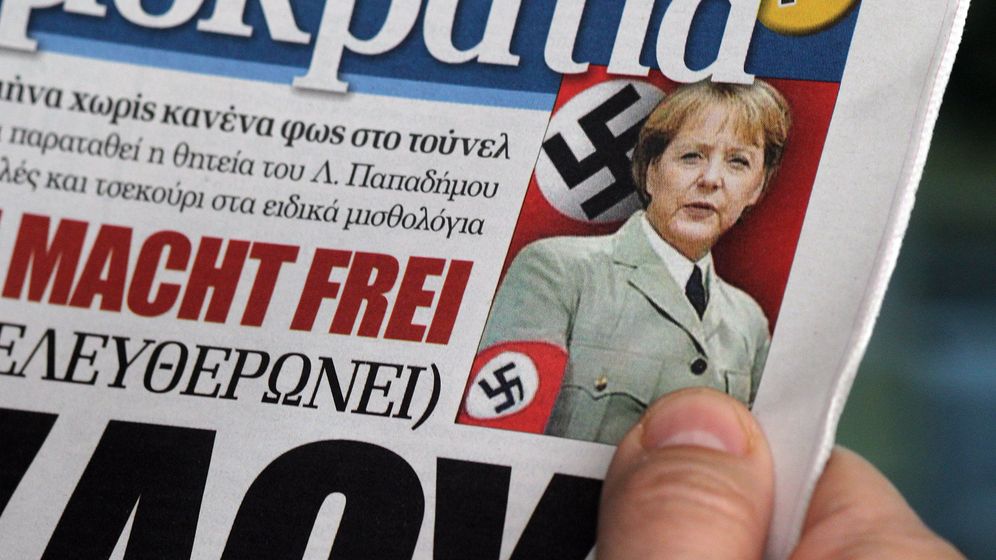 Photo Gallery: Dredging Up the Nazi Past in Greece

Stathis Stavropoulos is tired of constantly drawing evil Germans, but he does it again and again, slightly varying the theme each time. In his drawings, the well-known Greek cartoonist has dressed German Chancellor Angela Merkel in sinister-looking uniforms, placed her in a tank and depicted her frightening little Greek boys.

Stavropoulos portrays Horst Reichenbach, the German head of the European Union task force, as a sort of officer of the Wehrmacht, Germany's World War II army, controlling puppets with strings as he laughs sardonically. The puppets bear the faces of members of the Greek government. The word "Reich" in Reichenbach is written in capital letters.

The nasty German is once again wearing a uniform in Greece these days, taking babies away from mothers and counting the beans in fasolada, the white bean soup considered a national dish. "What should I do? That's just the situation now," Stavropoulos says. Even the New York Times recently published one of his cartoons, which Stavropoulos characterizes as "more tragic than funny."

A Sharp Rise in Anti-German Sentiment

Although similar reminders of Germany's Nazi past have occasionally appeared in the French, Spanish and British media, Germans have rarely been depicted as hideously as they currently are in the Greek media.

Images of Chancellor Merkel with a grim facial expression now appear almost every day on the cover pages of Greek newspapers. The caricatures depicting her as a sharp-toothed bloodsucker or as a strict schoolmaster with a raised index finger seem almost benign compared to the harsher depictions of her wielding a leather whip and wearing a Swastika armband.

There is only one other person who can compete with Merkel for the position of the most-reviled figure among Greeks at the moment: German Finance Minister Wolfgang Schäuble, who is sometimes shown wearing an SS uniform.

The vitriol isn't just on display in the tabloids. Journalist Georgios Trangas delivers live tirades against the "German occupiers" every night on Extra 3, an Athens-based television station. In his show "Choris Anästhetiko" ("Without Anesthesia"), he criticizes the "barbaric measures" being imposed on his country "by Berlin."

The radio station Real FM was recently ordered to pay a fine of €25,000 ($34,000) for "abuse of the Greek language" after Trangas used obscenities to berate Merkel in two live broadcasts.

The breakdown of the relationship between Germany and Greece is omnipresent, but the question is whether the media are fueling the hatred or simply reporting on it. Andreas Kapsabelis, editor-in-chief of the tabloid Dimokratia, has a clear opinion on the issue. He believes the Germans are trying to destroy the Greeks and using financial means to achieve what they failed to do militarily more than 60 years ago.

His paper recently ran a cover story entitled "Memorandum Macht Frei," a reference to the cynical slogan "Arbeit Macht Frei" ("Work Sets You Free") at the entrance to the Dachau concentration camp, on the one hand, and to Greece's obligations under the loan agreements with its international creditors, on the other. To ensure that even the most poorly informed reader would understand the headline, the word "Dachau" was printed in bold letters under it. "We are doing our job and voicing public opinion," Kapsabelis says.

Georgios Delastik writes of the "deployment of the Fourth Reich" in the left-liberal newspaper Ethnos. Delastik believes a possible goal of this new occupation is to ensure that German retirees, with their supposedly luxurious pensions, will be able to lie in the sun in an impoverished Greece.

Delastik, 59, is a friendly man with a mischievous smile. The head columnist, who writes his daily opinion pieces on a dedicated page in the paper, meets with us at his office in the editorial building. There are international newspapers and magazines neatly sorted and stacked along the walls, including SPIEGEL, Germany's Frankfurter Allgemeine Zeitung, the French newspaper Le Monde and the Spanish daily El País, with colorful Post-it notes sticking out from between the pages. Delastik, who speaks eight languages, is only too aware of the dangers of national resentment. "I am a staunch European," he says.

Nevertheless, he also uses the term "Fourth Reich" in his writing and refers to the austerity measures being demanded of his country as a "fiscal Dachau." When asked why he uses such harsh language, he says it is "self-defense" and explains that he uses his op-ed pieces as an attempt to re-establish the wounded dignity of the Greeks, and that he does so by emphasizing the Germans' most vulnerable side: their Nazi past.

No one in the Greek media is willing to acknowledge that the two things have nothing to do with each other. And anyone who could is currently waving the Nazi cudgel.

From Enamored to Hostile

German publications were in fact the first to use derogatory language, referring to the "bankrupt Greeks" as the "frauds in the euro family." The Greeks filed a lawsuit for collective libel against the Munich-based magazine Focus several months ago after it depicted the Venus de Milo statue with an extended middle finger in February 2010. The Greeks were also indignant at Merkel's criticism of "southern European inefficiency." Nevertheless, this hardly explains the ensuing tirades of hate.

Since then, Delastik says, anti-German sentiment has gone beyond the journalistic sphere. Grandparents are now reminding their grandchildren about the Nazi occupation, he says, and almost every Greek is suddenly an expert on the forced loan the German Reich imposed on Greece's national bank in 1942. "It's terrible," says Delastik, noting that this sort of thinking doesn't fit with his idea of a united Europe.

However, Delastik refuses to admit that he is also fueling anti-German sentiment with his harsh editorial pieces. It is his duty, he says, "to convince German politicians that their prescribed approach is the wrong one."

The Greeks cannot be humiliated again and again, Delastik says, adding that the tremendous pressure and the austerity measures imposed by international creditors -- Germany chief among them -- will not result in success but, rather, in the total refusal of his fellow Greeks to cooperate. In fact, at least according to the results of a survey published by the news magazine Epikaira last week, it does seem like many Greeks have become convinced of what was previously nothing but polemics.

Of the approximately 800 Greeks surveyed by the polling company VPRC, more than three-quarters said they felt Germany is hostile to Greece. Some 69 percent even believe that German politicians are genuinely pursuing the goal of establishing a "Fourth Reich." When asked what they associated with Germany, one in three respondents used terms like "Hitler," "Nazism" and "Third Reich." Before the crisis, the Greeks were generally enamored of the Germans.

The editor-in-chief of Greece's best-selling newspaper, the left-liberal Ta Nea, is a levelheaded man. Notis Papadopoulos, 50, studied in Essex and has worked as a journalist for over two decades. He has no interest in drawing parallels to the Nazi era. "We don't like such exaggerations," he says. Until recently, his paper supported the government's policies and, by extension, those of the international creditors. Nevertheless, he believes that a line was crossed when the idea of an austerity commissioner for Athens was leaked -- a German idea. "It made everyone think of Nazi officials," he says.

After that, Ta Nea printed on its cover page a drawing of a disgruntled-looking Merkel holding an anxious-looking Greece by chains. The words "Nein! Nein! Nein!" -- in German -- were printed above the caricature.

Commenting on Schäuble's most recent suggestion that the Greek elections scheduled for April be postponed, editor-in-chief Papadopoulos can only say: "That's undemocratic. This policy is counterproductive."

So far, the resentment has been limited to German politicians. But in a recent interview, German singer Ute Lemper, who plans to give concerts in Athens and Thessaloniki this week, implored the Greeks to "not think of me as a German."

6 Bilder Photo Gallery: Dredging Up the Nazi Past in Greece
Merkliste