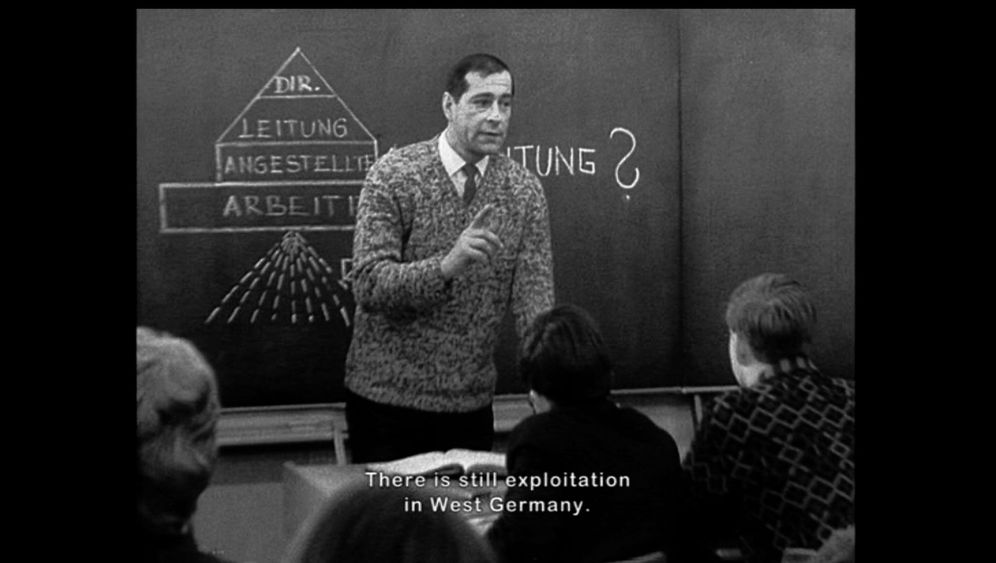 Every sip is a protest. Petra Mgoza-Zeckay, a pleasant, rosy-cheeked woman, takes a sip of water. "I don't drink Coca-Cola anymore, ever since the day (former German Chancellor Helmut) Kohl handed out Coca-Cola on Karl Marx Square." She takes another sip of water. She also lost her taste for bananas, which were also handed out during Kohl's appearance.

It is May 1, 2010, and Mgoza-Zeckay is sitting in a brown armchair in her living room in Leipzig. A bouquet of red carnations, a symbol of the workers' movement, is on the table. She says she was an "ML teacher" until 1990, a professor of Marxism-Leninism at Leipzig's Karl Marx University. Today, her profession no longer exists.

Bananas were a silly leitmotif in the days after the fall of the Berlin Wall, but for Mgoza-Zeckay they are still an issue today. In communist East Germany, bananas were absent in postwar life, save for the occasional Christmas-time treat provided courtesy of Cuba's Fidel Castro. To most, they were considered a Western luxury food, but after reunification, they quickly played catch-up. For a time, East Germans ate more than twice the number of bananas than the European Community average. Bananas, and the reasons why they are so symbolic for people like Mgoza-Zeckay, are one of the subjects of the film "Marxism Today."

The producer is Phil Collins, a 39-year-old British video artist who has nothing in common with the pop star but his name. With his brightly colored sweatshirt and curly blond hair, he seems as youthful as someone who had just graduated from art school. He smokes a lot, and he doesn't have a credit card or own a mobile phone. Collins, who has been living in Berlin since 2008, decided to settle there after receiving a grant from the German Academic Exchange Service (DAAD). Born in Runcorn in northwest England, he studied art in Manchester and Belfast. Collins speaks English peppered with German words, like "Wende" (literally, the "turnaround," the term used to refer to the changes after German reunification), "ML-Lehrer" ("ML teacher") and "neue Bundesländer" ("new German states," the states of the former East Germany).

At first glance, his work closely resembles that of a TV journalist. He lets people tell their stories, zooms in on their faces and hands, and creates collages by interspersing the stories with photos from private albums and old educational films in archives. When a TV reporter asked Collins at a press conference whether what he does "is really art," he replied: "If my work isn't art, then I'd like to ask you this: Is this news that you're producing here?"

Collins' film is being screened at this year's Berlin Biennale, the biannual art exhibition in the German capital which this year has taken "Reality" as its theme. American artist Mark Boulos is showing a video film about the New People's Army in the Philippines, a Maoist guerilla organization. In her video "Hinterland," French director Marie Voignier contrasts the artificial world of the Tropical Islands theme park in the eastern German state of Brandenburg with a real village in the surrounding Spreewald region. In her quirky images, Turkish photographer Nilbar Güre depicts the realities of life for young Turkish women.

Collins is fascinated by "the special beauty of people in horrific situations." For his 2004 video "They Shoot Horses," he filmed nine Palestinian adolescents in Ramallah as they spent eight hours dancing in a room, stopping only to pray. In his 2005 work "The World Won't Listen," young Turks, Colombians and Indonesians perform karaoke versions of songs by the British pop band The Smiths, one of Collins' favorite groups. And for his 2008 film project "Why I Don't Speak Serbian (in Serbian)," he traveled to the Balkans and asked Kosovo Albanians to explain, in Serbian, why they normally don't speak Serbian. Collins' works are ethnological studies, and his films document the social and political upheavals of the last 20 years.

Art is always a statement. It took a long time for photography and video to become established as art forms in their own right, partly because it is often so difficult to distinguish between staged and documentary images. Video artists like Bill Viola balked at telling stories in their art videos. Collins, on the other hand, seeks out stories. For "Marxism Today," he tracked down people who taught the subject known as Staatsbürgerkunde, also known as Stabü (Civics), or Marxism-Leninism, in schools, vocational schools and universities, while adhering to the official party line. To find them, he placed ads in regional newspapers in eastern Germany. Of the 40 German and 150 Russian former teachers between the ages of 40 and 70 who responded to the ads, Collins and a small team met with 10 in their apartments. Three of them, including Petra Mgoza-Zeckay, tell their stories in his 35-minute film.

From one day to the next, their convictions became old-fashioned, the state ideology a thing of the past and the collected works of Marx and Engels suddenly an embarrassing accessory. Mgoza-Zeckay, for example, lost everything during the period of reunification: her husband, her country and her job, as she says in Collins' film. She had planned to emigrate to Tanzania, a fellow Socialist country, with her husband, who was African. But then he committed suicide. In 1990, the ML departments at universities were closed once and for all, and Mgoza-Zeckay entered a retraining program to become a social worker. She is unemployed today.

Andrea Ferber, another former ML teacher, applied Marx's theories and embarked on a career in the free market economy. She now works for a non-governmental organization and devotes herself to economic theory. Finally, Marianne Klotz, the third interviewee, set up a dating agency for people with an academic background.

This is material for a classic documentary film, and at first glance Collins' video feels like a documentary. The interviews were shot by Matthias Schellenberg, an experienced cameraman who has also shot art documentaries, as well as the German film "Die fetten Jahre sind vorbei" ("The Edukators"), which is critical of capitalism.

But this objective, realistic aesthetic is interrupted in "Marxism Today," when the viewer sees an excerpt from the black-and-white German television program "Von Pädagogen für Pädagogen" ("By Educators for Educators"), in which Günter Pippig, a professor in the eastern city of Zwickau, drones on monotonously about the teaching profession until the sound of his voice gradually fades away and transitions into film music. Collins also sets himself apart from documentaries by "looping" East German film material and constantly repeating the same film segment. At other times, he shows a blank screen while people introduce themselves. There are no captions to identify the interviewees or voiceovers. The people in the film only speak for themselves.

Marxism Returns -- For a Fleeting Moment

In the second part of his film on Marxism, Collins crosses the boundaries of realism once and for all. Unlike a journalist, he intervenes, stages scenes and sets up an experiment.

He asked the teachers to teach at the university once again. Using their old teaching materials and speaking in the idiosyncratic language of the former German Democratic Republic they gave lectures on Marxism-Leninism, attended by economics students at the University of Applied Sciences in Berlin's Karlhorst district, a former elite East German university.

The students were unfamiliar with Marx's ideas, and none of them knew about "Das Kapital." They asked many questions: How exactly were prices determined in the GDR? Wouldn't it be fairer if the added value went to the workers? Isn't greed partly a driving force? Should we nationalize banks?

Before the event, Collins put up a poster in the university. It read: Who wants to attend a seminar on Marxism? Each attendee was promised €20 ($25).