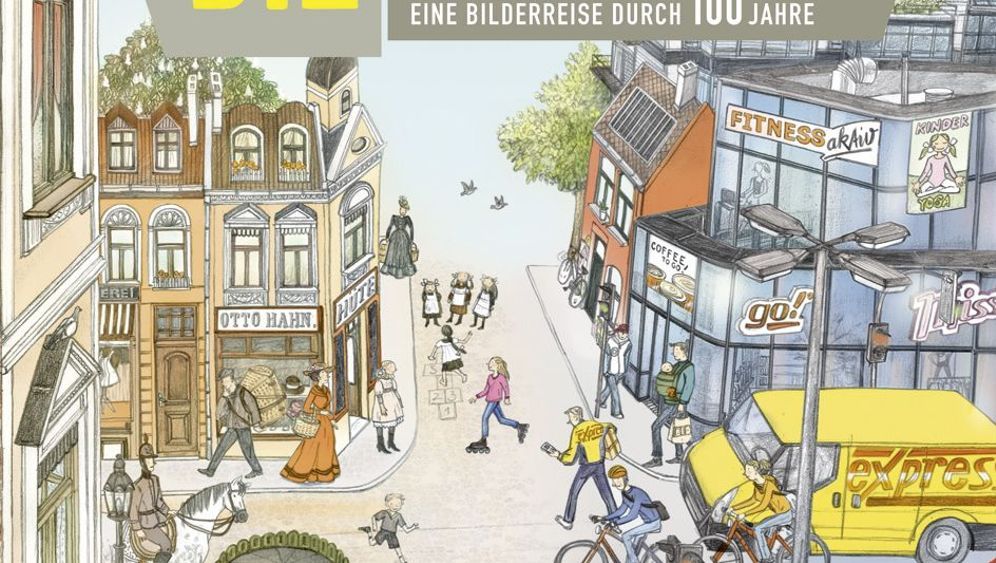 The illustration shows a gang of children in Hitler Youth uniforms marching down the street, banging a drum and waving a swastika-emblazoned flag. On the next page, the aftermath of the war can be seen. Children play among the ruins of bombed-out buildings, dejected refugees walk past with suitcases and money changes hands for black market goods.

It sounds like a hard-hitting adult graphic novel about the Third Reich, such as Art Spiegelman's Pulitzer Prize-winning "Maus." But the work in question, "Die Strasse" ("The Street"), is aimed at children as young as five. The recently published book tells the history of Germany's turbulent last 100 years through the prism of a single street and an apartment building which is home to two families. A series of double-page spreads in the style of the "Where's Waldo?" books shows how the street changes over the decades from 1911 to the present day.

"It's a book that you can look at with the whole family," says co-author Christa Holtei. "Everyone can talk about their memories of the time and explain a bit about how things were."

Inevitably, the book's center of gravity is the Third Reich period and the devastation of the immediate postwar period, when the rebuilding of Germany began. But dealing with such historical events in a children's book presents certain challenges. "The problem is how to address such a terrible subject without directly confronting the children with the horror," says illustrator Gerda Raidt, who developed the idea for the book together with the publisher, Germany's Beltz & Gelberg. "That's why I tried to incorporate little hints all over the pictures."

The way Raidt deals with the persecution of the Jews shows that approach. The street scene from the 1910s shows a grocery store with the name Loewenstamm. On the next page, which represents the Nazi era, the same shop is seen with its window smashed in, shards of glass littering the sidewalk -- a reference to 1938's Kristallnacht, when many Jewish-owned homes and businesses were attacked and destroyed.

Similarly, on the page which shows the immediate postwar period, there is no direct evidence of the violence of the war and the Allied bombing. Instead, chalked messages can be seen on the walls, written by people desperately looking for their missing loved ones -- a detail that Raidt says she discovered when looking at photographs from the period. "You don't need to show body parts lying on the street," Raidt says. "It's horrible enough to show that people were looking for their family members and couldn't find them."

Other references are equally subtle. In the interior of one of the apartments, a black mourning sash hangs over a portrait of a man on the wall -- an allusion to the father lost in the war. Meanwhile, the father in the other family has lost his lower arm. Above the family apartments, a portrait of Adolf Hitler has been stashed in the attic.

Inspired by Own Family History

The complicity of ordinary Germans is also suggested in the families depicted in the apartments, who appear to be continuing with their normal lives despite the rise of the Nazis. Raidt admits that she based the depiction partly on her own family history. "They all lived through this time and went along with it," she says. "They were not enthusiastic about it, but they also didn't do anything to resist it."

Other controversial aspects of German history are also addressed. In the postwar spread, an exhausted-looking woman has just arrived at one of the apartments with her child. It is clear from the family's expressions that she is not entirely welcome. Raidt explains that the figure represents the Germans who were expelled from Eastern Europe after the war. "I imagine that they were not so welcome, because there was already little enough to eat and then more people were arriving."

The figures of the expellees were also inspired by Raidt's family history. She explains that her own father had to flee Silesia (now part of Poland) after the war with his family. In the book, the children appear to be the only family members who are happy: They are having a pillow fight in the bedroom, oblivious to the adults' worries. This, too, was a detail taken from Raidt's own background. "My father was just a child at the time," she says. "He thought the whole thing was a great adventure. But for his parents it must have been a huge catastrophe."

The second part of the book aims to teach children about the history of the last 100 years by focusing on different themes, such as the development of technology or the changing role of women, with illustrations and accompanying text. But the political developments depicted in the street scenes are not directly addressed -- there is no explanation of who the Nazis were, or what happened during the war. And the pictures themselves are ambiguous: The members of the Hitler Youth are smiling, and the children next to the damaged Jewish store appear to be pleased to see the destruction.

Raidt explains the thinking behind the show-don't-tell approach. "If children want to know more about these things, then they have to ask their parents. I think it's better if you have to ask for yourself, rather than having everything explained to you -- because then they already tell you how to interpret things."

The idea that you can simply depict the history of the Third Reich without explaining it is a relatively new one in Germany, where the question of how to talk about the Nazi era -- and how to explain it to children -- is a very sensitive issue. Raidt feels that the 2004 film "Downfall" about the last days of Adolf Hitler's life served to change attitudes. "It was the first film which simply featured Hitler as a character without going to great lengths to explain the history. That was perhaps the point when it became acceptable to take that approach in Germany."

But isn't there a risk that parents with far-right views could interpret the pictures of the Nazi era in a positive way for their children, glorifying the Hitler Youth and blaming the Allies for the destruction of German cities? "Of course there's a danger of that," Raidt admits. "There will always be some people who will interpret it that way. But that's not my fault -- they have already formed their opinions elsewhere."

Christa Holtei, the co-author, considers the lack of interpretation to be an advantage. "You can't avoid the subject. The pictures are right there in front of you," she says. "When the children ask 'Why is the window broken?' or 'Why do they have such a funny-looking flag?', you simply have to explain it. And that's a good thing."