Not all historic places announce themselves with pomp and fanfare. Sometimes they can be modest and unassuming, even a little bit shabby.

The Bösebrücke bridge to the north of Berlin's Prenzlauer Berg district is just such a place. This desolate corner of east Berlin is the spot where the Iron Curtain cracked wide open 20 years ago. It was here that East Berliners streamed past the suddenly moribund Bornholmer Strasse border checkpoint and into West Berlin at approximately 9:20 p.m. on Nov. 9, 1989. Yet today there is little to indicate that this is the place where communist East Germany entered its death throes.

That is soon set to change, however. Berlin's city government has commissioned a new urban square to commemorate that fateful day in 1989. Just over a week ago, Sinai, a firm which specializes in landscape architecture, was named as the winner of the competition to design the new "Platz der 9. November 1989" (Nov. 9, 1989 Square). 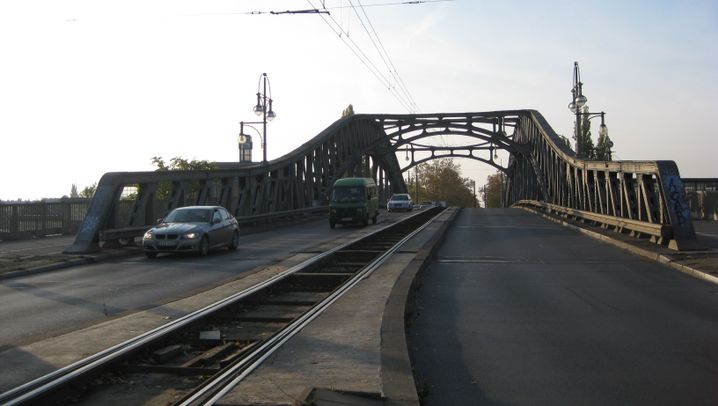 Project leader A.W. Faust from Sinai feels that this neglected corner of Berlin is somehow fitting for the memorial site. "It is not right in the middle of everyday city life," he told SPIEGEL ONLINE. "I find that very beautiful, that it is has something special, a certain rawness."

Rainer Klemke, the Berlin city official in charge of managing public memorial sites, told SPIEGEL ONLINE that the pressure to come up with a memorial square came from the grassroots level. "It was demanded by the local people from Prenzlauer Berg and (neighboring district) Pankow who gather here every year to mark the anniversary of the fall of the Wall," he said, explaining that the memorial will be "a symbol of that joy." He added that the €350,000 ($520,000) required to build the square was only finally made available two weeks ago. Ironically, the monument is being financed with the assets of the SED, the former East German communist Socialist Unity Party.

It was a challenge to come up with an attractive plan for the bleak spot, which is one of the many gashes and gaps that show where the border once stood in divided Berlin. On one side of the busy Bornholmer Strasse road, a desolate and neglected former car park overgrown with weeds leads to the somber gray steel Bösebrücke bridge and the Bornholmer Strasse commuter rail station. Tram tracks run down the center of the road, while on the other side, a graffiti-sprawled hulk of concrete, a remnant of the Berlin Wall, stands a few meters back from the road, separating the sidewalk and a narrow strip of grass from a sea of urban allotments.

There are few signs that the location is one of the most historic in Germany. An information post, part of a new "Mauer Weg" ("Berlin Wall Trail") for tourists, gives a brief audio description of the history of the site in several languages. A little further along, a forlorn piece of the wall has been made into a sort of sculpture. It bears a plaque featuring a quote from former German Chancellor Willy Brandt: "Berlin will live and the Wall will come down."

Sinai faced a number of constraints in designing a visual interpretation of the heady events of Nov. 9, 1989. They had only around 160 meters of former wall to work with, together with the grassy area between the wall and the road, which at its narrowest point is only four meters wide.

"We realized that the way we perceived that day was as a series of moments, some of which have now become iconic," Faust told SPIEGEL ONLINE, explaining how his team developed their design. The moments started with Politbüro member Günter Schabowski announcing at a news conference that all restrictions for traveling abroad were lifted "immediately," and culminated in the moment the first East Berliner went through to the West while the border guards, who would previously have had orders to shoot any would-be escapees, looked on impassively.

"We wanted to recall the sum of these moments," Faust says. "Each moment made a huge impression and added to the momentum of the previous one."

A series of these "moments" will be presented along a dark pathway using pieces of metal inscribed with a word or quote. The path gets narrower as the visitor heads west along the memorial, and at the final point of this part of the display there will be a small copse of cherry trees (see graphic). Faust explained that the firm has chosen a variety, Autumnalis, that blooms in the fall. "Hopefully there will be cherry blossoms falling on the ground every Nov. 9," he says.

The project will also include four large information boards, each 3 meters by 3 meters in size, that can be rotated to create an enclosed space. A wider area at the end closest to the bridge will provide a forum for commemorative events. Work should be finished on the site by summer 2010.

Meanwhile the future of the desolate larger space on the other side of Bornholmer Strasse, which was where cars coming over from West Berlin had to stop for inspection by border guards, is unclear. Bordered by scrubland and bushes, the now disused car park is pockmarked with holes and covered in broken glass and weeds. On sunny days local kids skateboard or ride their bikes here. A small hairdresser's on the corner of one block and a locksmith's on another are the only concessions to commerce in the rundown area, which is about as far from hipster Berlin's cool cafes and clubs as it is possible to get.

The space was not available to use in the memorial as the land has been sold to private developers. Rainer Klemke, the Berlin city official, confirmed that the site, which measures around 400 by 150 meters, had been sold to the Lidl discount supermarket chain but said that the company have decided not to build a store on the site and are looking to sell on the land instead. "We would love to see a new housing development here, with cafes and a green area," Klemke explained, saying that it is regrettable that the space has remained a "no man's land."

Faust says he is surprised not more has been done with the site since 1989, although he admits that "there were simply other priorities and no great pressure to do something" at the Bornholmer Strasse site. "You can't declare every place a memorial, even though that can be tempting in Berlin."

Nevertheless, efforts are being made to spruce up the wasteland ahead of Monday's celebrations to mark the anniversary of the fall of the Wall. On a drizzly afternoon earlier this week, a group of young men could be seen scraping away the weeds and clearing debris. German Chancellor Angela Merkel will join Berlin Mayor Klaus Wowereit here at 3 p.m. on Monday for the anniversary celebrations, where they will walk across the former border in a symbolic gesture. It is hoped that they will be accompanied by Soviet leader Mikhail Gorbachev and former Polish President Lech Walesa, who will both be in Berlin for the festivities. Red and white barriers have already been erected down either side of the street and around the former car park, and the Bornholmer Strasse train station has been given a fresh lick of paint.

Herr Joergens is peering across the barriers with curiosity as the young men carry out the clean-up operation. Joergens, who describes himself as a "real Berliner" and prefers not to give his first name, lives just around the corner from the former Cold War checkpoint, though he grew up in the nearby Mitte district of East Berlin.

The site has personal significance for Joergens: His cousins all lived in West Berlin and used the Bornholmer Strasse crossing to visit him and his family. He describes how the border guards used to check cars coming over from West Berlin in the car park. "If someone looked suspicious, they would come down from their cabins and use mirrors on long poles to check under the cars," he says.

"Before the Wall went up I used to go over to the West all the time to visit my cousins and to play rugby, especially against the British soldiers serving there," the 72-year-old recalls. "Then the Wall went up in 1961 and that was that -- game over."

Joergens admits he and his wife did not actually cross over to the West at Bornholmer Strasse on the evening of Nov. 9, 1989. "We watched it on TV and went over the next day."