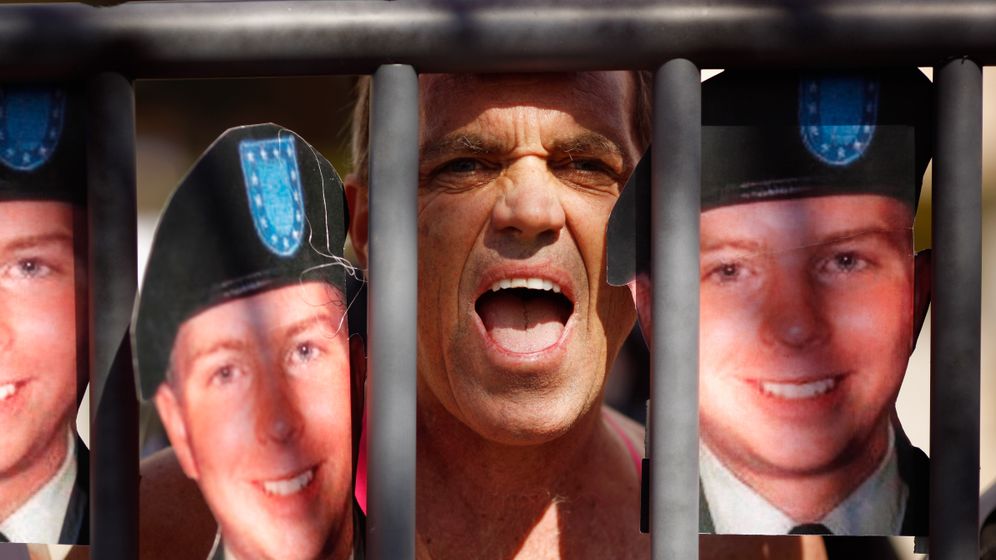 Photo Gallery: Words of Defense and Criticism of Manning

Daniel Ellsberg knows a few things about heroes. In fact, many Americans see him as a hero. When he was working for a key think tank associated with the United States military, Ellsberg photocopied the so-called Pentagon Papers, 7,000 pages of top secret analysis and documents that revealed that American politicians knew all too well how hopeless the situation in Vietnam was. When the New York Times published the secret documents in 1971, it opened the eyes of Ellsberg's fellow Americans once and for all to the details of a disastrous war.

But when Ellsberg, now 80 and white-haired but still energetic, talks about heroes, he is no longer thinking about the past. Today he says that Bradley Manning, the presumed source of the classified documents about American military officials and diplomats published by WikiLeaks last year, is "unreservedly a hero." There are so many things Manning's actions uncovered, says Ellsberg, as he begins to rattle them off. Could the Arab Spring have materialized without the WikiLeaks reports on the corruption of Arab potentates? And would anyone have been talking about war crimes committed by American soldiers in Iraq without the documents on detainee abuse?

Ellsberg is convinced that like him, Private Manning, who was only 22 at the time, wrote history and, just as in Ellsberg's case, the powerful are now intent on punishing Manning for what he did. Former US President Richard Nixon once threatened to throw Ellsberg into prison. But to the country's highest courts, the truth was more important than government secrecy, and Ellsberg and the Times emerged unscathed. The man who had exposed the government's secrets about Vietnam became the prototype of the whistleblower.

Starting on Friday, Ellsberg intends to do his best to ensure that Manning will also go unpunished. That's when the public military proceedings against the presumed WikiLeaks source is set to begin at Fort Meade, a US Army base near Washington DC. Prosecutors have assembled 34 charges against Manning, the most serious of which is "aiding the enemy."

If he is found guilty on the charge of having leaked hundreds of thousands of documents from military computers in Iraq, Manning could face life in prison. The most important documents, the US diplomatic cables, were published last fall on the WikiLeaks website as well as in a number of media outlets, including SPIEGEL. It is not clear at this point how long the proceedings will last.

The defense is also extremely well prepared. David Coombs, Manning's attorney, has summoned witnesses for the defense, including US President Barack Obama, Secretary of State Hillary Clinton -- and Daniel Ellsberg. Hundreds of journalists and thousands of protesters from around the world are expected to turn up as the military court addresses the question of whether Manning is an irresponsible hacker or a hero.

The case seems clear enough for the military prosecutors. They intend to portray the private as a minor computer snoop who, in a bid for attention, sought to cripple the entire US diplomatic community with his download. To argue their case, the prosecutors will use a video that shows Manning meeting with hackers in Boston, as well as chat logs in which a user named "Bradass87" -- presumably Manning -- crowed over his impending prank, writing: "Hillary Clinton and several thousand diplomats around the world are going to have a heart attack."

Attorney Coombs, a levelheaded former officer, will hardly deny that Manning was "Bradass87." But he also says that the chats written by "Bradass87" are more characteristic of a whistleblower than a hacker determined to wreak havoc. Manning wrote that he hoped his efforts would lead to "worldwide discussion, debates and reforms."

Otherwise, Coombs will attempt to prove that the WikiLeaks revelations did very little harm to the United States and, in fact, that American military officials only have themselves to blame for the leaking of classified information.

The star witness Coombs will use to support his first claim could not be more convincing: the White House. The attorney claims that a senior White House official, together with a large staff, carefully combed through the classified documents. And, lo and behold, says Coombs, the conclusion of this review was that the release of the documents did not do "any real damage to national security."

If Manning's defense team manages to convince the court to order the release of this classified document, it could at least soften the charge of "aiding the enemy." It was for this reason that Coombs wanted Secretary of State Clinton to testify before the court over whether US diplomacy is not in fact running as smoothly as ever despite the publication of the WikiLeaks documents. But the government has since turned down his request to have both Clinton and Obama testify in the trial.

Coombs argues that the US military could have prevented the entire humiliating incident from happening in the first place. After all, says Coombs, Manning -- who was ridiculed by his fellow soldiers because of his homosexuality -- had already drawn attention to himself with his conspicuous behavior early on, so much so that he should never have been sent to Baghdad to work in military intelligence there. According to Coombs, a psychologist will testify that he had classified Manning as "at risk to himself and others," and that Manning was to be kept away from loaded weapons.

But not from state secrets, apparently. By imposing disciplinary penalties on 15 officers who ignored Manning's at times bizarre behavior, the US military has indirectly admitted that its control mechanisms failed miserably in the Manning case.

Nevertheless, US legal experts believe that a conviction of the defendant is practically certain, because the evidence that he betrayed government secrets is so clear. "Does anyone seriously believe that he will be acquitted?" asks military law expert Philip Cave. It's true that mistakes made by Manning's superiors could prove to be mitigating, as could the motives behind his presumed act of treason. Nevertheless, a long prison sentence seems likely.

"He broke the law," President Obama, a proponent of whistleblowers before his election, has already decided. Attorney Coombs intends to sharply criticize this assessment as an inadmissible attempt to influence the military judges. "I can't imagine a juror who wants to have a future in the military and be promoted to higher rank and greater responsibility going against the statement of … guilty made by his or her commander in chief," said Kevin Zeese, a political activist and Manning supporter.

Obama also said that Manning could not go unpunished the way Ellsberg, the man who leaked the Pentagon Papers, once did, because the two cases are too different. Ellsberg, who sees Manning as following in his footsteps, cannot accept this assessment. He only agrees with the president on one point: Manning disclosed secret information, he says, but "all of the pages that I released were top secret."

5 Bilder Photo Gallery: Words of Defense and Criticism of Manning 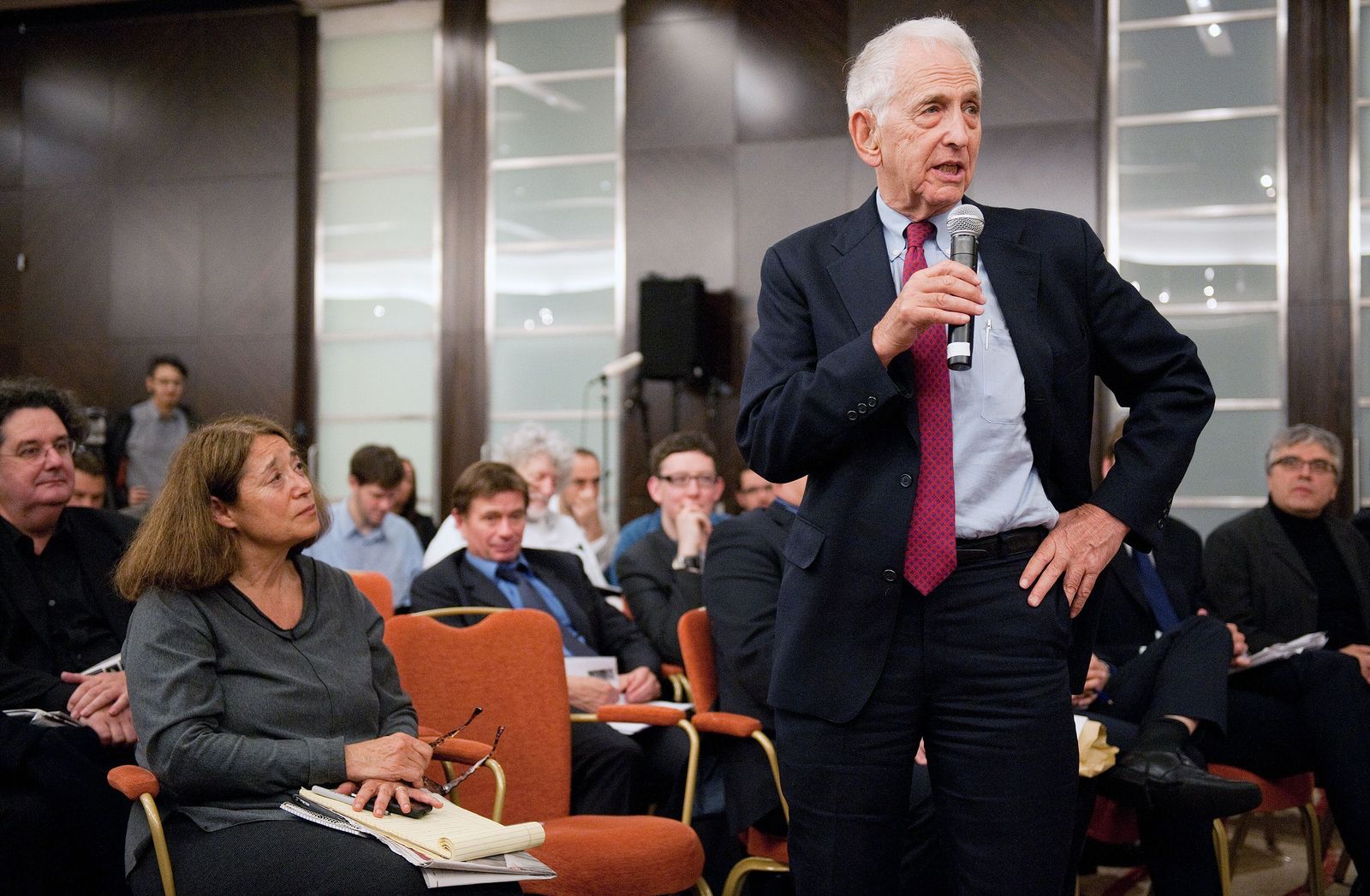 Former US military analyst Daniel Ellsberg, who leaked the Pentagon Papers to the New York Times in 1971, has said Manning is "unreservedly a hero." There are so many things Manning's actions uncovered, he says. Could the Arab Spring have materialized without the WikiLeaks' reports on the corruption of Arab potentates? And would anyone have been talking about war crimes committed by American soldiers in Iraq without the documents on detainee abuse?