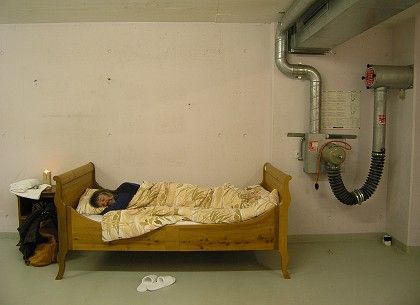 The future of Swiss tourism.

"Less is more" was the motto selected by the twin Riklin brothers when they set up their "zero-star hotel" in an abandoned nuclear bunker. The beds were bought at bargain prices from a condemned hotel in the region; the walls they left unpainted. "Decorating is out of the question," says Patrik Riklin, who devised the project along with his brother Frank. But he insists the hotel's stark Cold War atmosphere is "damned comfortable."

The town of Sevelen, located in the Swiss canton of St. Gallen, was at first just looking for a way to lodge musicians invited to play at a planned cultural center. But Sevelen had no room for a new hotel. So the town council decided to look more closely at one of the local "civil defense bunkers."

"No one will ever want to sleep there," declared town council leader Roman Zogg, when he and fellow council members emerged from the bunker after a first inspection. The Riklin brothers and their "Studio for Special Projects" nevertheless received a commission. The bunker looked like creative challenge, so the two artists took it on personally, thinking maybe they could forge something new out of the concrete block.

"We had to break with norms, and take ownership over the gray areas," says Patrik Riklin, explaining their approach. They gave their hotel a rating of "zero stars" -- not to degrade the service, said Patrik, but to give themselves creative freedom. "It allows us to define for ourselves exactly what we're offering."

The brothers only had to comply with one requirement from the Swiss military: None of the walls could be demolished, and the civil defense facilities must at all times be ready to revert to their original function -- within 24 hours.

The hotel offers guests a few different classes of comfort. There's the "standard layout," for example, which features original military bunkbeds, and a "luxury" booking, which provides plush, antique Biedermeier beds. A luxury booking, which costs around twenty euros a night, includes coffee in bed every morning and cookies in the nightstand every afternoon.

Instead of providing enough hot water for every guest, each morning after the hotel opens a wheel of fortune determines who gets to shower first, and who gets the ice-cold water leftovers. The luxury service, however, includes hot-water bottles to make the bunker more comfortable.

But only in the reception area -- which the Riklins call the "wash and lounge oasis" -- can customers confirm that the outside world still exists. There they can gaze at a monitor which -- in an otherwise windowless building -- provides a live video feed from outside.

For the town of Sevelen, the hotel is almost as exciting as it may be for future visitors. The streets surrounding town hall have buzzed with excitement. Frank and Patrik's telephone won't stop ringing. The whole world, it seems, has taken an interest in the bunker-hotel. The Riklin brothers never thought their small project would garner so much attention. "Inquiries are coming in from Japan, China, Vietnam, the United States and Turkey," says Patrik.

The hotel's operations will be taken up by the town itself, which, endowed with a population of just 5,000 and with panoramic views of the Alps, stands aloof from the hurly-burly of the wider world. All the townspeople will be called upon to offer assistance, whether it's baking cookies or providing room service. "We want to use the resources at our disposal as effectively as possible," explained Riklin.

If they fill all 54 beds, the artists expect the profits to be considerable. After a few years, even the several million Swiss francs spent on the original construction of the bunker could be recouped. They also expect this village on the Rhine to earn generally greater revenue through expanded tourism.

But why should Sevelen be special? "The rest of Switzerland has tons of civil defense facilities in idyllic surroundings," gushes Patrik. He and his brother are already thinking a step ahead -- towards establishing a new Swiss trademark for the "zero-star hotel." They've already registered the name, in both German and English. "People could hike from bunker to bunker," Patrik imagines. "And bunkers will definitely go down well with Japanese tour groups."

The townspeople of Sevelen will vote in November on whether this expanded project has a future. The bunker's first test customers, though, were enthusiastic. The hotel is already more of a landmark than the cultural center it was first meant to serve. No matter what becomes of the cultural center now -- its fate is still in question -- the hotel will open for business in January. At least until the next military emergency.