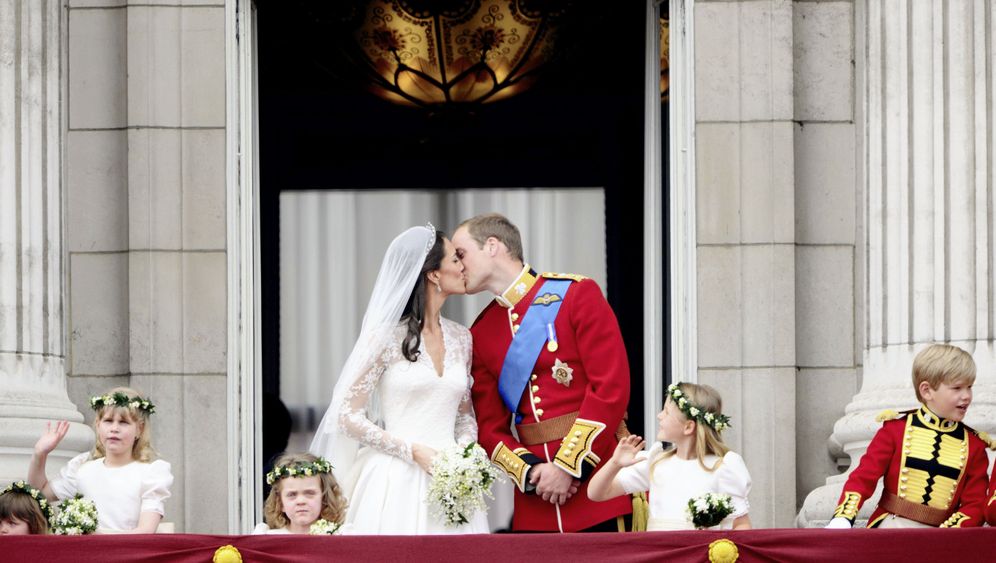 Photo Gallery: The Wedding of the Year

If you want to know just how important a particular event is to the Brits, you just have to look at the bets that the bookmakers are accepting. In the runup to the wedding of Prince William and Kate Middleton on Friday, you could, for example, bet that the bride or groom would drop the wedding ring during the ceremony in Westminster Abbey (something which did not happen), or that Kate would mix up the first names of her husband, like Diana before her (she did not), or that Prince Philip would fall asleep during the ceremony (fortunately he did not) or that the Queen would wear a yellow hat (which she did).

The British had been preparing for the royal wedding for weeks. Some had chosen the best place to observe the proceedings and had camped out on the sidewalk for days. Others chose to use the public holiday to hold royal-themed parties.

There were certainly enough attempts to make money out of the occasion. The high-end supermarket chain Waitrose, for example, had a royal couple made out of gingerbread on sale. Demand rapidly increased in the past few days, and hundreds of the gingerbread royals were sold.

The route that Kate and William traveled after the ceremony in their century-old coach had resembled a carnival scene for days. People were already camped out on Thursday evening to reserve the best places along the route. More and more arrived over the course of the evening, braving the cold. The sense of anticipation grew by the hour. Across the country, around 5,000 street parties were held in what was no less than an impressive patriotic spectacle.

The wedding was also a kind of national festival. The British were celebrating their royal family and their own Britishness. Early on Friday morning, hundreds had gathered at the Goring Hotel, where Kate Middleton spent her last night as an unmarried woman together with her parents and siblings. Spectators outside Westminster Abbey fought fiercely for the best seats. Some of them had left their homes or hotels at the crack of dawn to get a place in the front row, and were not willing to settle for less.

Even after the wedding, people continued celebrating -- some out of conviction, others simply because everyone else was doing so. The euphoria did not let up.

Whether you are a royalist or a republican, there was no denying that that wedding was an historic event. For many people, it was all about being part of it, celebrating and being carried away by the atmosphere. "It's the wedding of our future king," was a common sentiment. For that reason alone, it was important. Many Brits consider Prince Charles to be rather dull. They accepted his marriage to his long-term partner Camilla, but were not excited by it.

With Kate and her wedding, all that was different. She is "Little Miss Middle Class," even if not everyone was in favor of the second-in-line to the British throne marrying the daughter of a self-made millionaire. It is the story of the girl who became a princess, and who will perhaps be queen one day.

In the past eight years, Kate and William have in their relationship got right all the things which Prince Charles and his brother Andrew messed up in the 1990s. Little is known about Kate's hen night, apart from the fact it was said to be "nice." In contrast, Sarah Ferguson, the ex-wife of Prince Andrew, dressed up as a policewoman for her hen night and went to a nightclub with her friends.

Kate and William are considered more discreet, something which will no doubt be appreciated by the Queen -- and by the British public. The young couple are anything but eccentric; there are no servents in their rented Welsh farmhouse, they regularly shop at the local Tesco supermarket and they have a fondness for frozen pizza.

They seem to be well grounded, and eminently likeable. On the eve of their wedding, William left Clarence House together with his brother Harry and spoke to fans who were waiting outside. "All I've got to do is get my lines right," William said. In a brochure issued by the palace, the couple said the "affection shown to us by so many people during our engagement has been incredibly moving." Such a personal tone is rarely heard from the palace.

And ordinary people have responded warmly to the royal couple. Police in London reported more than 1 million spectators celebrating in the streets on Friday. They brought champagne and umbrellas with them, but the bookmakers turned out to be wrong on one point: The weather remained dry.

Some 100,000 people enjoyed the joyous occasion at the public viewing in Hyde Park alone. At the end of the service, those present rose from their picnic blankets to roar out "God Save the Queen"; fervently and passionately, just as if they were actually standing in Westminster Abbey rather than on well-trampled blankets. During the ceremony itself, thousands remained silent as they listened to the words of the Archbishop of Canterbury. And, of course, they took the opportunity to inspect the bride's dress yet again -- and to comment on it. "Very classy," was the conclusion on the simple 1950s-style dress, with its V-neck, lace sleeves and long train. Kate also wore a tiara lent to her by the queen which had been made by Cartier in 1936.

Massive applause broke out at the end of the wedding ceremony, flags were waved and red, white and blue confetti filled what had, by then, transformed into blue skies. "Isn't that beautiful," said one woman with a sigh. Another held up a sign in her hands reading: "William, you should have chosen me."

As Kate and William left Westminster Abbey at 12:15 p.m. after the wedding ceremony, jubilation erupted all along their procession route. The tension and excitement that had built in the previous days all seemed to be released in thunderous cheering, applause and screams as the carriage passed by carrying the royal bride and groom. The crowds that had gathered along The Mall melted into one giant Mexican wave.

Finally, on the balcony of Buckingham Palace, the couple gave their long-anticipated kiss -- actually two of them -- one lasting 0.7 seconds and the second lasting 1.1, considerably longer than the kiss shared by Charles and Diana over 30 years ago. Later in the afternoon, the pair returned to the royal procession route in an Aston Martin bearing "Just wed" on the license plate and an "L" for learner sticker.

After hours of waiting on the morning of the wedding, though, expectations were extremely high -- and not all were fulfilled. "They drove by pretty quickly," complained Kay, a 54-year-old nurse from Norfolk. She had been standing to the side of Westminster Abbey since 5:30 a.m., but she only caught a fleeting glimpse of the royal couple. Within a matter of seconds, Kate and Wills had already passed by. She would have seen a lot more if she had watched it on television, but she still tried to make the best of it. "You have to have seen a royal wedding at least once in your life," she said.

By comparison, the turnout at the street party organized by the British anti-monarchist group Republic was pretty poor. Only around 700 people came to their party at Red Lion Square in central London.

The republicans didn't have any TV, champagne or beer, but they did have little sausages, juices and music. And even though it was clearly not their day, they were still in a good mood. One mother dressed her 5-year-old son in a T-shirt bearing the caption: "When I'm big, I'm going to be president." Another held high a placard saying: "Princesses Are Dumb."

Graham Smith, the group's campaign manager, says that its number of supporters has more than doubled in the post-engagement period, from 7,000 to 15,000. Still, he admits that the royalists are enjoying an even greater increase in support.

The royalists might also enjoy this boost for a long while to come because the wedding is just the first in a series of celebrations in the Windsor family. After a period of several years without any big occasions, there is now a whole slew of them: In June, Prince Philip will celebrate his 90th birthday. Zara Philipps, the granddaughter of Queen Elizabeth II, will be married in July.

Then, in June 2012, the queen will celebrate 60 years on the throne with another four-day weekend of festivities. As a high point, plans call for a fleet of 1,000 private boats and ships to sail on the Thames through London, with the queen herself seated in the lead ship. London Mayor Boris Johnson promises a "majestic flotilla of vessels, large and small."

And then, of course, there is also still that unplannable but still secretly anticipated event that would overshadow all the others: the birth of William and Kate's first child. Bookmakers are already taking bets.