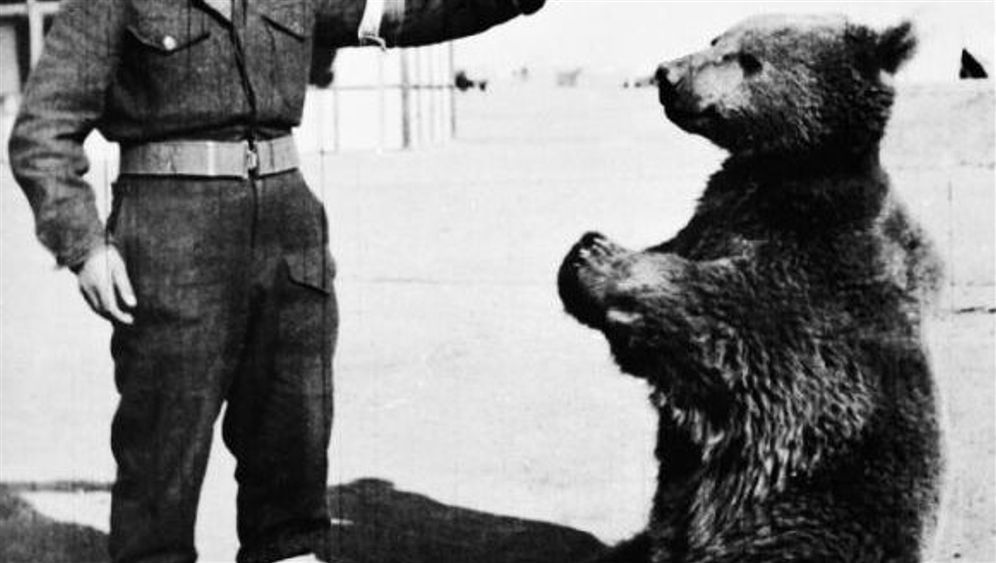 Archibald Brown had already seen a lot during the war -- but nothing like this. It was mid-February 1944, and the courier for British Field Marshal Bernard Montgomery was in the port of Naples to help process a unit of Polish soldiers that had just arrived by ship from Alexandria, Egypt, to advance with British soldiers against German and Italian forces. Among his everyday duties was checking crew manifests and speaking with freshly arrived soldiers. But this would be no typical day.

Brown had already spoken with every single member of the new unit, the 22nd Artillery Supply Company of the Polish II Corps -- except one.

"We looked at the roster, and there was only one person, Corporal Wojtek, who had not appeared," Brown recalled in an interview years later. But the documents said that Wojtek belonged to the unit. Brown had his service number and his pay book, but the soldier himself seemed to have vanished without a trace.

Brown then called out the soldier's name, but there was no response. So he asked the other soldiers why Wojtek wasn't coming forward. An amused colonel responded: "Well, he only understands Polish and Persian." Brown was then led to a cage holding a full-grown Syrian brown bear, the unit's most popular member.

Two years earlier, by sheer chance, Poland's army had taken in what was probably its most unusual member ever. Though that was some 70 years ago, Wojtek is still remembered today, his heroic deeds in the war living on in the tales and memories of those with whom he served. He became irreplaceable to his comrades -- not because he was wild beast, but because he truly became one of them.

Wojtek's unusual military career begin in 1942 in the Alborz Mountains of northern Iran. Legend holds that a young boy from Hamadan Province found the orphaned bear cub in the wild, perhaps, as some believe, after hunters had shot the cub's mother. The boy took the fluffy little cub home, but it wouldn't be long before he changed hands. In the fall of 1942, the boy reportedly sold his playmate to Polish soldiers for a few tins of food.

The soldiers were part of the so-called "Anders Army," made up of former Polish prisoners of war that Russia had released after being attacked by Germany, its former ally, in 1941. In the second half of 1942, the army was sent to the Middle East to help push back advancing German forces.

The clumsy little bear quickly became the beloved pet of soldiers in the 22nd Artillery Supply Company. They fed their ursine ward milk from bottles and showered him with the attention he had come to adore after losing his mother and being exposed to humans at an early age. In return, he boosted the soldiers' morale.

"The friendly welcome for the returning, often extremely tired, soldiers by Wojtek was, for us, a very important relaxing element," recalled Wojciech Narebski, a Polish veteran interviewed for the 2011 documentary "Wojtek -- The Bear That Went to War." The soldiers had suffered much in the Soviet internment camps, and they were now still far from friends and family and living in difficult conditions. To them, the cute, cuddly bear seemed like their only source of joy.

Knowing very little about how to handle a bear, the soldiers simply treated their new comrade as if he were one of them. "He was just like a dog," the Polish veteran Augustyn Karolewski told the BBC News in 2008, adding that he "drank a beer like any man" and liked cigarettes, too, which he would simply gulp down.

The veteran Narebski also recounted how the bear would regularly hit him up for cigarettes and could handle his beer. For the massive bear, Narebski told the BBC News in 2011, "one bottle was nothing. … He didn't get drunk."

From Bear to Legend

But before long, it looked like the soldiers would have to part ways with their new companion. On April 14, 1944, they found themselves in Egypt waiting to board a ship headed to Naples, where the unit was supposed to join in the Allied campaign in Italy. Port officials in Alexandria refused to allow the wild animal on board the ship, stating that only soldiers could make the journey.

So the soldiers improvised: They quickly obtained an authorization from the head military office in Cairo -- and made their bear an official soldier. They gave him the name "Wojtek" -- which means "he who enjoys war" or "smiling warrior" in Polish -- in addition to a service number, a rank and a pay book. The trick worked, and Wotjek was allowed on board.

When Wojtek arrived in Naples, Archibald Brown, the British official, must have thought it was merely a joke. But the soldier-bear was actually a legal member of the Polish military, and one that provided his comrades with vigorous support.

By then, the once small cub had grown to become a big bear, standing 1.82 meters (6 feet) tall and weighing about 220 kilograms (485 pounds). Having resolved to put their furry comrade's strength to use, the soldiers taught how him to carry crates full of heavy mortar rounds.

Indeed, in an interview for the documentary on Wojtek, a British veteran recounted how he was taken aback when he suddenly saw a full-grown bear calmly schlepping mortar shells past him during the bloody Battle of Monte Cassino, in the spring of 1944. Whether it is true or not, the story of his support in this decisive battle gave the bear legendary status among the soldiers. With the approval of the Polish high command, the company's emblem was changed to one showing a bear carrying a massive artillery shell.

A Hero in Retirement

Even after the war ended, Wojtek's journey was not over. In 1946, he was on the boat that took his brothers-in-arms to Scotland, where they joined 3,000 other soldiers being billeted in a camp on the grounds of the Winfield Aerodrome, near Hutton in Berwickshire. Once demobilization of the troops began, the question about where the bear should live arose. Should it be Iran or Poland? Or should he remain in Scotland?

"The communist authorities in Poland wanted to take him to the zoo in Poland," Narebski told the BBC News. "But my colleagues who were staying in Scotland were against this." Thus, the hirsute hero escaped the communist dictatorship in Poland by a hair.

Wojtek's new home was the Edinburgh Zoo. There, he became one of the biggest attractions, and many veterans of the war would come back to see him.

Augustyn Karolewski visited his old comrade on several occasions and discovered that he still responded to Polish. "As soon as I mentioned his name, he would sit on his backside and shake his head wanting a cigarette," Karolewski told BBC News.

In 1963, the unusual bear died in Edinburgh at the age of 22. By then, Wojtek had grown to become a symbol of the solidarity between Poland and Scotland, and he continues to live on in the memory of people from both countries. In March 2009, the Scottish Parliament held a reception in Wojtek's honor.

In November 2011, a parade of veterans and bagpipe players made its way through Edinburgh as part of a celebration that included a eulogy -- delivered in Polish -- to the bear-soldier. There are already a number of commemorative plaques and statues in various museums, and the Wojtek Memorial Trust is lobbying to get a large bronze statue of Wojtek erected in the heart of Edinburgh.

On top of all this, Wojtek's unique history continues to be repeated in stories, books and film. In 2011, Will Hood, the director of the "Wojtek --The Bear That Went to War" documentary, was asked what he found so fascinating about the bear's story.

"The fact that he himself thought he was a human poses some very interesting questions about what it is to be human," Hood responded.

This story originally appeared in German on SPIEGEL ONLINE's history portal, einestages.de. You can read the German text here.