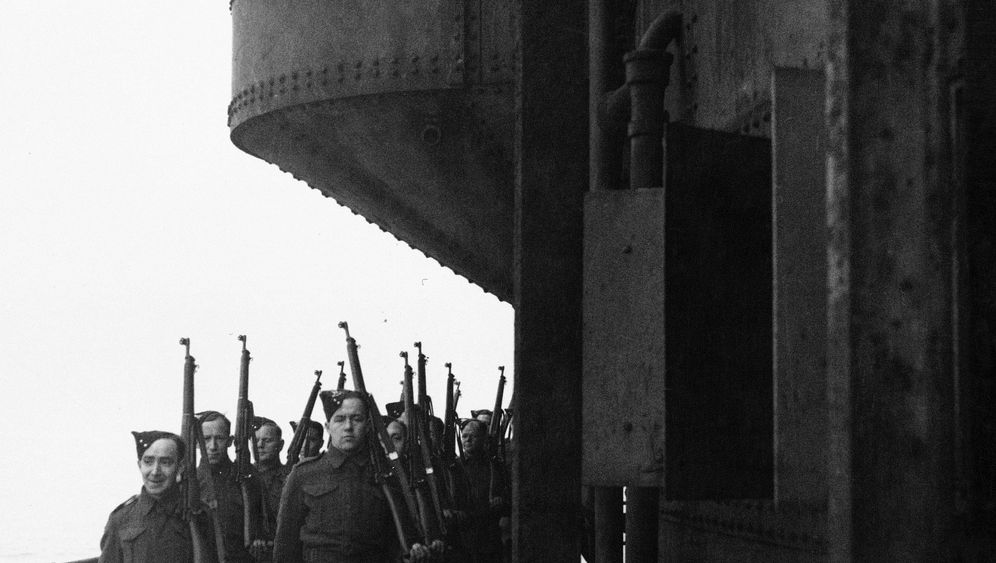 Perhaps the captain of the Baalbeck did see, through the dense fog, the bizarre shape jutting out of the water in the Thames River estuary, but it was already too late to stop the engines. Traveling at full speed, the Swedish freighter slammed into a group of strange steel hulks. The accident happened about six kilometers off the east coast of England in the late afternoon of March 1, 1953. The steel structures were boxes the size of two-story apartment buildings, each of them perched on massive concrete piers and connected by walkways. Guns were mounted on the roofs.

When the fog lifted the next day, the scope of the catastrophe was clearly visible from the shore. The outline of the British Army's damaged Nore Fort was visible on the horizon, but now it was missing two of its seven towers.

The accident dealt a serious blow to Great Britain's plans to defend its air space, striking at the heart of a project that the country's army and navy had forcefully pursued since the beginning of the Cold War in the 1950s: The construction of at least a dozen sea fortresses around the island to protect strategically important ports and shipping channels. The British wanted to be prepared. The Admiralty had no doubts as to the military effectiveness of the unusual air defense system. After all, the massive steel towers had already served as a frontline defense against Hitler's Wehrmacht, though not from the very beginning of the war.

In the Stranglehold of the German Navy

Soon after World War II began, the German navy had already managed to strike the island kingdom in its most vulnerable place: shipping. About 2,500 freighters were sailing at any given time to bring goods to Great Britain from around the world. The British also used ships to handle the bulk of their domestic flow of goods. The busiest route ran along the east coast of the island, a lifeline that the enemy was already threatening to cut off only a few weeks into the war.

German destroyers relentlessly laid mines off the east coast and the Thames estuary. More than 100 ships sank in the first few months of the war, and their cargos, so vital to the British and their war effort, sank along with them. The situation became even more menacing when the Germans began dropping their bombs in mid-November 1939. British commercial shipping was brought to a virtual standstill.

Mine sweepers were constantly in operation, but the results remained unsatisfactory. Many losses were simply inexplicable. It appeared as if the Germans had mines that the British were unable to detect. To address the problem, the head of the Admiralty, Winston Churchill, ordered the navy to obtain a sample of Germany's new weapons -- whatever the cost.

As luck would have it, British searchlights illuminated a German Heinkel bomber on the night of Nov. 21, 1939, just as it was dropping an unknown object attached to a parachute off of Britain's east coast. Experts salvaged and examined the object, which turned out to be a magnetic mine.

Although the British were now able to adjust their mine sweepers to search for the devices, the risk to shipping would continue, as a competition erupted between mine layers and mine searchers, as well as between scientists and engineers on both sides as they continued to develop new mines -- and new countermeasures. The Admiralty became convinced that its only hope to free itself of the deadly flotsam was to shoot down or at least deter the mine layers.

At this time, ministry officials remembered a civil engineer named Guy Maunsell who had apparently been thinking about an imminent invasion for some time. Maunsell had originally presented the Admiralty with his designs for unmanned diving capsules. According to his plan, these submersible stations would be permanently anchored in positions surrounding the British coast, and from there would be able to observe all enemy movements above and below the water surface. No one knows whether any of these bottle-shaped devices were ever built, but the original design apparently convinced the Admiralty to work with Maunsell.

To fend off the mine layers in the Thames estuary, Maunsell initially proposed the building of offshore structures that resembled the Arc de Triomphe in Paris, both in shape and size. The Admiralty approved the design after a few changes were made. Under the modified design, two hollow reinforced concrete towers, each of them seven meters in diameter, would be mounted on a floating pontoon. Each of the seven-story towers would provide enough space for a crew of about 120 men, including equipment and food. Two 3.7-inch anti-aircraft guns and two 40 mm Bofors guns were to be mounted on a platform at the top.

Between February and June 1942, four of the structures, which measured 33 meters (108 feet) tall and weighed 4,500 tons each, were finally towed out to the sites, some 6 to 12 nautical miles off the coast. Once the pontoons had been flooded, the structures settled on the ocean floor and the crews were able to begin their work.

In early 1941, while these so-called naval sea forts were still being built, Maunsell was asked to design an anti-aircraft defense for the Mersey estuary near Liverpool. Because of the difficult ocean floor conditions there, Maunsell chose a different model. He placed four hollow reinforced concrete legs, each with a diameter of 90 centimeters (about three feet), on a reinforced concrete foundation in the shape of a picture frame. Each leg was to support a two-story steel structure with a footprint of 11 by 11 meters.

Seven of these 750-ton towers, spaced 30 meters apart and connected by walkways made of steel pipes, formed a fort. The arrangement of the towers was patterned on the land-based anti-aircraft batteries, with a control tower with radar at the center, surrounded by four towers with 3.7-inch guns and one tower with two Bofors guns and, slightly away from the core arrangement, one tower with searchlights. In 1943, the army ordered three structures similar to those in the Mersey estuary for the Thames, including the Nore Army Fort.

Living conditions on the artificial islands were extreme, with each of the seven-tower fortresses housing up to 265 men at a time. The isolation and close quarters were hard to bear, especially in the concrete legs of the naval sea forts. While the officers' sleeping quarters were in the upper part of the cylinders, where there was adequate light and oil heating, it was intolerable for the crews, who spent their nights below the surface of the water.

To distract themselves when there was nothing to do, the men were convinced to take up hobbies. Psychologists recommended painting, knitting or building models. The men remained on board for six weeks at a time, spending 10 days on land in between deployments. Many required psychiatric treatment, and the soldiers soon came up with their own name for the manmade platforms: "Fort Madness."

At the end of the war, the crews had chalked up an impressive list of successes. Some 22 aircraft and 30 V-1 flying bombs where shot down from the Thames forts, and one was involved in the sinking of a German speedboat. But the use of the forts in the Mersey estuary had proved to be difficult. Because of their location on a constantly shifting sandbar, the structures on stilts repeatedly sank into the ocean floor. In 1948, the Admiralty had them dismantled because they posed a danger to shipping.

But there were different plans for the forts in the Thames estuary. In July 1948, a delegation from the War Office paid a visit to the Nore Army Fort to look into possible uses for the existing forts. A year later, a secret meeting was held at the War Office to discuss the need for additional Maunsell army forts.

The group agreed that another 11 forts were needed to secure all key points and shipping lanes around the perimeter of the United Kingdom. After several changes had been made, the sites had been determined, and so had the costs. The entire project would cost an estimated £2.8 million British, an enormous sum in the postwar period. The "Baalbeck" accident at the Nore Army Fort in early March 1953 didn't exact enhance the popularity of the project, and in July 1953 the decision was made to suspend it.

There was another accident at the Nore Army Fort in late 1954, which prompted the War Office to discontinue all maintenance work on the forts in 1956. The sea forts attracted attention once again in the 1960s, when British pirate radio stations occupied the platforms. Today private initiatives are underway to preserve the four remaining Maunsell sea forts as curious relics of World War II.