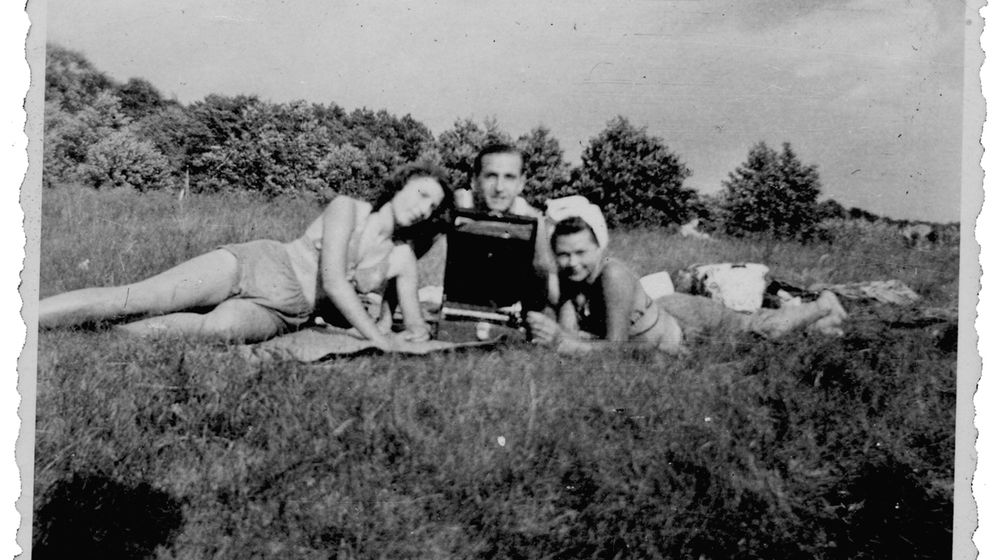 "The school had been bombed when we arrived this morning. Waltraud, Melitta and I went back to Gisela's and danced to gramophone records."

Young girls are made of stern stuff. In December 1942, while Allied bombs rained on Berlin and Nazi troops fought for control of Stalingrad, 15-year-old Brigitte Eicke began keeping a diary. For the next three years, the young office apprentice wrote in it every single day.

Now published in German as "Backfisch im Bombenkrieg" -- backfisch being an old-fashioned term for a girl on the cusp of womanhood -- it adds a new perspective to Germany's World War II experience and shows not only how mundane war can become but also how the majority of Germans were able to turn a blind eye to Nazi brutality.

Until relatively recently, accounts of Germans' own wartime suffering were considered something of a taboo, their own trauma eclipsed by the horror of the Holocaust. But now that the wartime generation is dying, every slice of first-hand social history has inherent value.

Gerda Kanzleiter works at Berlin's ZeitzeugenBörse (ZZB), a non-profit organization that collects and documents eyewitness testimonies. "We've lost many of the elderly people we've worked with already, and we're losing more every month," she says. "Very soon now, none of them will be left."

Eicke's diary was discovered in the nick of time, when she sent it to writer and local historian Annet Gröschner, who co-edited and annotated the published version. "The paper was yellowed and had virtually disintegrated," says Gröschner. "It was almost unreadable."

But it proved quite a find. "What is striking about the diary is its authenticity," she says. "It's very different from personal accounts of World War II that were written with the benefit of hindsight and with later generations in mind."

And as Gerda Kanzleiter from the ZBB points out, anecdotal history is often much more revealing than scholarly research, let alone fiction and drama. For Germany, which took decades to reach a point where it could face its demons, it has played a key role in understanding the war in all its facets.

That includes its ordinariness. For long stretches, Eicke's diary reflects an astonishingly normal teenage existence, evoking a life on the home front that is humdrum and hair-raising in equal parts. She nonchalantly notes her frequent cinema visits as diligently as she logs the length of air raid warnings, and seems no more riled by the havoc wreaked on her city by the "Tommys" than by her mother's bad moods. But her phlegmatic commentary belies the grim reality of the time.

"Margot and I went to the Admiralspalast cinema to see 'Meine Herren Söhne.' It was such a lovely film but there was a power cut in the middle of it. How annoying!"

There's a good reason why "Gitti," as she was nicknamed, sometimes sounds a little glib. "She only kept a journal in order to practice her stenography skills, so she was economical about what she said," remarks Gröschner. "The diary is simply a clear-eyed account of her life at the time. She had nothing to prove and no reader in mind, so she didn't embellish anything and she didn't censor herself. And even though she doesn't go into much detail, she conveys a lot with a few words."

Gitti seems altogether more preoccupied with first kisses and dressmaking patterns than world events. She is also possessed of extraordinary sang froid. Of an air raid in March 1943 that killed two, injured 34 and left 1,000 in her neighborhood homeless, she merely grumbles that it took place "in the middle of the night, horrible, I was half-asleep."

Guileless as she is, Gitti's apparent inability to see the broader picture goes beyond youthful egotism. Although her gossipy comments on school friends and colleagues suggest there's nothing wrong with her observational skills, Gitti is utterly unaware of Third Reich atrocities, referring only once in the entire diary to the Nazis' systematic deportations of Jews.

"Waltraud and I went to the opera to see ' The Four Ruffians.' I had a ticket for Gitti Seifert too. What a load of nonsense, it was ridiculous. We walked back to Wittenbergplatz and got on the underground train at Alexanderplatz. Three soldiers started talking to us. Gitti is so silly, she went all silent when they spoke to her. The least one can do is answer, even though we weren't going to go anywhere with them. Jews all over town are being taken away, including the tailor across the road."

But despite working at a textiles company based in the Hackesche Höfe in Mitte, then the heart of Berlin's Jewish district, she fails to notice anything amiss.

Gitti is 86 years old now, and she lives just a few streets away from where she grew up. She remains unapologetic about her indifference. "I was young and busy with my own life," she recalls. Just around the corner from where she worked was a nursing home in the Grosse Hamburger Strasse serving as a collection center for Jewish transports to Theresienstadt and Auschwitz. "My son always said to me: How could you have been so oblivious?" she says. "I never saw a thing!"

Nazi terminology still trips easily off her tongue. "Berlin was already Judenrein ("cleansed of Jews") by then, and I was too young to have noticed anything before that. There were some Jewish girls in my first ever class photograph, taken in 1933, but by the time the next was taken, they were all gone. When I asked my mother about them, she said they had moved to Palestine."

Decades would pass before she understood what had happened. "It was only when I visted Buchenwald in the 1970s that I saw photographs of the camps," she remembers. "It took me years to realize what had gone on."

Humble as it is, Gitti's story is emblematic. As British historian Ian Kershaw wrote in 1983: "The road to Auschwitz was built by hate, but paved with indifference." She is immune to ideology. All she does is swim with the tide, blithely chronicling her rise through the ranks of the League of German Girls (BDM) and cursorily mentioning in March 1944 that she has joined the Nazi party. She does so mainly to make friends, it seems.

"Usually all we did was sing songs," she says. "But yes, we were pretty keen on Hitler -- of course we were, we were all indoctrinated as children."

But politics never interested her. A few milestones make it into her diary: In early 1943, she alludes to Goebbel's famous speech -- "Total War began today," she notes dispassionately -- and in July 1944, to the failed assassination attempt on Hitler's life. She doesn't appear to be unduly upset.

By and large, she is more concerned with day-to-day hardships -- although under the circumstances, many of them seem more like luxuries. In November 1944, for example, as Hitler was planning a major offensive in the Ardennes region on the Western Front, she is complaining about a disastrous perm and worrying about going to work looking a fright.

Neither Perpetrator Nor Victim

Hers is a perspective seldom glimpsed in Germany's World War II literature, a field in which the female voice took a while to be heard.

"In the 1950s and '60s, the focus was more on memories of battle and the male experience," says Arnulf Scriba, who coordinates a project at the German Historical Museum called "Collective Memory," an archive of personal testimonies.

As he points out, these tend to be supplied by either perpetrators or victims -- especially the latter. "They can expect to be 'understood', while clearly no one prides themselves on having murdered or raped or simply been on the wrong side," he says.

Gitti, however, is neither. She is merely a cog in the wheels that kept Nazi Germany turning, a young woman skilled in the art of blotting out ugliness, willing to believe what's she's told, and ultimately, one of the lucky ones.

Although she experienced the Battle of Berlin first-hand and lost both her father and her uncle on the front, she is spared the harrowing experiences detailed in "A Woman in Berlin," the diary published in 2005 of a woman raped repeatedly during the Red Army occupation, not to mention the fate of Anne Frank, who began her diary just months before Gitti began hers.

Anne Frank was two years younger than Brigitte Eicke, and the fact that the two young women share a similarly fresh and unaffected narrative voice makes the contrast between their lives all the more shocking. While Anne died in Bergen-Belsen, Gitti was able to close the door on Nazi Germany with no further ado. No sooner had the war ended than she became a member of the Anti-Fascist Youth Organization.

"I get the impression that they want the same thing as the Nazis, just under another name. The same demands, the same speeches," she wrote in July 1945.

"We just muddled through, we had no choice," she says today. Others might beg to differ. Many lessons were learnt in World War II, but as her diary illustrates, what growing up in Nazi Germany taught the young Brigitte Eicke more than anything else was survival tactics. And that doesn't make her story any less valuable.

"Basically, every eyewitness testimony has something interesting to tell us," says the German Historical Museum's Arnulf Scriba. "Whatever their experience, they ultimately add to our understanding of the past."