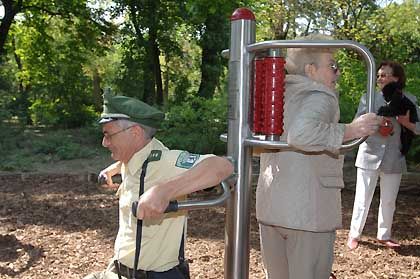 Germany is aging, according to a slew of recent studies. And with children becoming a rarer sight in Germany, senior citizens are likely to be one of the fastest growing demographic groups -- even on playgrounds.

A new outdoor playground in Berlin's Preussen Park is the first of its kind in Germany. Instead of catering to screaming tiny tots and children with boundless energy, the space is strictly for adults. The equipment, in fact, is designed for people at least 1.5 meters (5 feet) tall -- children can use it only with adult supervision. The idea is to encourage seniors to exercise.

Eight graffiti-resistant machines made of robust stainless steel are laid out on a layer of soft bark under a canopy of trees. It looks as if someone has taken a gym and placed it in the middle of a forest.

The grand opening on May 2 was attended by local politicians, the director of the company that built the playground, local residents and even the coach of Berlin's Hertha soccer team. A local politician named Klaus-Dieter Gröhler gave a short speech and then invited Renate Zeumer to say a few words. Zeumer runs Playfit, the company that designed the playground. In Beijing five years ago, she noticed how people used simple pieces of equipment to exercise in parks and on the streets.

Zeumer said she adapted the Chinese idea to a playground with machines suited to European heights. The total cost for building the playground was €20,000 -- around a quarter to a fifth of the usual cost of a children's playground. With Germany's declining birth rate, it looks like an idea whose time has come.

Zeumer turned to the flexibility machine -- a metal pole with two big red pulleys and handlebars attached. "Pull, stretch, arms, upper body -- it's really good for you," she said. "Try it."

An 85-year-old lady took the plunge, but had some difficulty getting it to work. "No, my arms are too short!" she complained.

Zeumer went over to the leg trainer, which acted like a swing for legs. "Oscillating movements and swing," she shouted, showing them how it was done.

"Yeah, but what's it good for?" asked one 71-year-old man, wearing sweatpants.

"It stretches the back and front of the legs," Reumer said.

Karsten Heine, the soccer coach, squatted at the back-massage machine -- the idea was to bend at the knees and rub your back against a piece of knobby material. Like a cat scratcher, but for people.

There were no young people at the opening, just pensioners. Later, though, when the celebrities were gone and the machines glowed in the sun like shiny public memorials, the battle over control of the playground began.

Two youngsters swung wildly at the leg trainer, as if they wanted to tear it apart. Behind them an old man had a go at the back massager. Meanwhile, two elderly ladies had their walking frames stuck in the layer of bark that covered the playground.

Maybe Berlin isnt Beijing quite yet.