"A prediction; The final will be played by 22 men kicking a ball about for 90 minutes, and at the end the Germans will win" (Gary Lineker on Twitter)

The football season is finally over in England. Manchester United are the champions, Wigan won the FA cup, Chelsea won the Europa League, and my team, West Ham, came a very respectable tenth in the Premier League. Excellent.

OK, OK, I know, the season is not quite over. There's still one more important game to come at Wembley: England's friendly against the Republic of Ireland on Wednesday 29 May. But then we can all turn our attention to cricket.

I've forgotten something? Just joking. Of course I've heard that there's another "friendly" at Wembley on Saturday, 25 May between two German teams. I don't know why they need to go to London to play each other, but I'm sure they'll have a good time.

In fact, I think it's wonderful that Bayern Munich and Borussia Dortmund are in the Champions League final in our capital. For two reasons. First, this guarantees that a German team will actually win at Wembley. (Note: that is not really funny, because, after their defeat in 1966, the German - or West German - team won at Wembley in 1972, 1982, 1991, 1996 and 2000.) 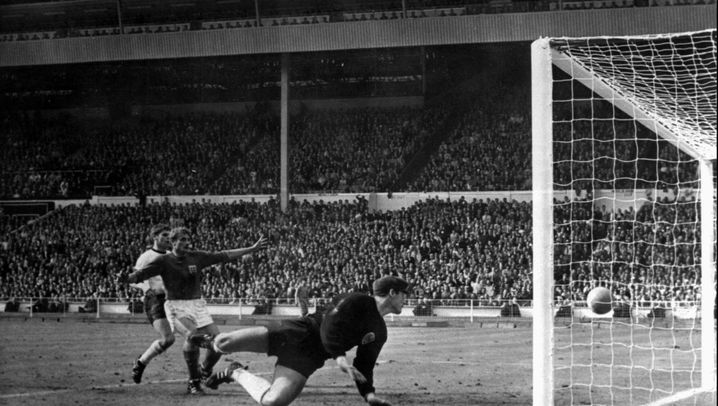 The match in 1996 was Germany's semi-final victory on their way to winning the European Championship. At the time, England's tournament song was "Three Lions", with its famous "football's coming home" lyrics. How ironic it would be - and how painful for the English - if the Bayern and Dortmund fans sang that song together at Wembley before the game. Go on! I dare you!

The second reason why I like the idea of an all-German final is purely economic. Britain and its public finances are in such dire straits that they need all the bailout help they can get from rich Germans. So, if you're in London for the weekend, please spend as much as possible in our pubs, restaurants, hotels, shops, clubs, and, well, wherever else you go after the game…

"Keep it on the island, mate!"

German fans will, I am sure, be given a great welcome. Anti-German nonsense can still be found in Britain's tabloids, but normal Brits admire Germany for its efficiency and, increasingly, its football. They have also discovered that Germans are fun, including their "comedy ambassador" to Britain, Henning Wehn.

To help you to become a member of the British football community - before, during or after the game - here's a short guide. First, you need some typical football clichés, not all of which follow standard grammar:

You also need to shout abuse during the game. If a defender kicks the ball a long way off the pitch, you can shout "Keep it on the island, mate!" If a striker can't shoot on target, you could say, "He couldn't hit a cow's arse with a banjo". And if a player has been generally useless, you can say, "He's done sweet FA!". The initials "FA" stand for the Football Association, the governing body of English football. But "FA" or "sweet FA" is also a more polite way of saying "F*** all", a vulgar expression that means "absolutely nothing". If you want to be really colloquial, you can say, "He ain't done f-all".

Songs and chants are a key part of football. Two melodies are particularly important. First, the chorus of "Guantanamera", known to German fans from Ein Rudi Völler , es gibt nur ein Rudi Völler. In English, it goes like this: "One Arjen Robben, there's only one Arjen Robben", or, if you can speak incredibly quickly, "One Robert Lewandowski, there's only…". The same melody can also be used to taunt opposing fans when your team silences them by scoring an equalizing goal: "Sing when you're winning. You only sing when you're winning".

Many clubs have their own songs, of course, such as "You'll never walk alone", Liverpool's song of solidarity. My sorry team, West Ham, on the other hand, has one about our dreams fading and dying:

Now, if I can hear all you Bayern and Dortmund fans singing that song on Saturday while I'm watching the game on TV, I'll seriously consider taking up German nationality.

And may the better team win.