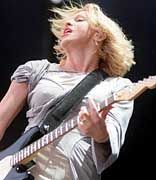 How did this idea strike you: A comedian - Jim Carrey - plays a comedian - Andy Kaufman?

Love: I know, it sounds bad. Besides, I was a little prejudiced ever since I heard that Jim was really popular in school. Only the people no one liked in school have ever amounted to anything in life. Jim's proven to be the exception.

SPIEGEL ONLINE: Andy Kaufman, the main character of the movie, isn't all that well-known outside the US...

Love: Right, Europeans might think Andy is a fictional character. No one could possibly be as odd as Andy.

SPIEGEL ONLINE: Did you know him?

Love: I saw him on TV when I was a kid. He was supposed to be playing a lovable character. But he really scared the hell out of me. I watch TV to be entertained. But that wasn't entertainment - that was anarchy. He didn't care in the least what other people thought of him.

SPIEGEL ONLINE: Your performances with your band "Hole" aren't exactly tea parties. Did you take anything from him?

Love: I do think it's important to be recognized by an audience. That automatically brings a commercial element into my performance.

SPIEGEL ONLINE: So you don't see any relationship between Andy Kaufman and your music?

Love: The musical counterpart to Andy is punk. When people yelled or spit at him, he took that as evidence that his style was working.

SPIEGEL ONLINE: Your style is working, too. You're a darling of the rock critics. But your albums aren't selling all that well. Why?

Love: Because rock's being pushed against a wall like it always has been. What sells is pop. That's the way it's always been, with the exception of a few successes - like, say, R.E.M. - and that hasn't changed in principle.

SPIEGEL ONLINE: How deeply involved are you with the musical inheritance of Kurt Cobain?

Love: Usually, that'd be the end of the interview. But I'm in a good mood. I'll just say this: It's important that Kurt's music isn't shamelessly sold out and that his legend isn't exploited.

SPIEGEL ONLINE: Do you still feel that you're primarily a musician? Or is acting taking the upper hand?

Love: I've been living a pretty schizophrenic life over the past few years. I still like I'm on the same wavelength as my music fans. There's a lot of bitterness, anger and hopelessness among teenagers. As long as I can react to that honestly, I'll be making music. But for the long term, I do plan to switch to film. Preferably as a director.

SPIEGEL ONLINE: Your daughter's already going to school now. What's it like, being the daughter of a rock star and a movie star?

Love: Definitely different than what I felt as a kid. I grew up with hippies in a tent and skipped most of high school. For two years, I was at a girls' school in New Zealand. It was great. I think separating the sexes in school is a great thing.

Love: No, not at all. Girls wouldn't drive themselves nuts worrying about whether or not they're too fat or if they've got pimples. And the poor guys would be better off, too. Just read Stiffed by Susan Faludi, and you'll see what we feminists have done to these poor guys.